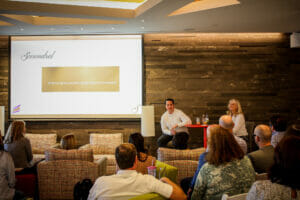 Editor’s note: to request tickets for the Nov 10th C&C with Nike’s former Head of Global Brand Innovation Sarah Kay, email [email protected] – and you can read more about it HERE.

Endeavor’s most recent Collaborators and Cocktails speaker series featured Joe Cash, entrepreneur, owner, and founding chef of Greenville’s new restaurant Scoundrel – which just so happens to be conveniently located right across the street from Endeavor. Field trip, anyone?

Cash joined Endeavor’s very own Shannon Wilbanks for a Q&A session, before a sold-out room full of Endeavor members, other creative and business professionals, and foodies, to discuss his remarkable culinary journey, the upcoming opening of French bistro-inspired Scoundrel, and his English bulldog, Mr. Bingley.

Growing up in Greenville, Cash and his family dined out together once or twice a week. It brought them together. They caught up, they made memories, and Cash’s lifelong appreciation for the power of sharing a meal was born. Once he hit his teenage years and it was time to get a job, a friend of his parents knew of an opening washing dishes in a restaurant, giving him his first taste of life behind the counter.

Starting as a busboy at Lone Star Steakhouse on Congaree Rd., Cash found himself intrigued and enamored with the magic that took place in the kitchen, and knew that’s where he wanted to be. However, for insurance purposes, Lone Star required kitchen employees to be 18 or older. So, instead of buying a lottery ticket or getting a tattoo like some might on their 18th birthday, Cash walked into the Lone Star kitchen and said, “I’m ready.” He graduated from washing dishes to making them.

After about six months of being a food runner and “on the line” (a line cook, for us non-restaurateurs), Cash was running the grill and sending out filet mignons left and right. He recognized his strengths, he thrived on pushing himself to improve, and soon he knew he was ready for more.

And that’s really the big takeaway of Cash’s journey. He’s been presented with opportunities and surprises throughout his life. But choosing to make the very most of those opportunities – along with recognizing his own strengths and long-term goals – that’s what made the difference.

Cash’s talent took him to Charleston for a year, where he worked at Red Drum before setting his sights on New York City. There, he landed a stagiaire position (a weeklong, unpaid apprenticeship) under Michelin star chef Thomas Keller at Per Se. That position “taught me the fundamentals of being a chef,” said Cash. “I learned technique and flavors and really developed my palate.” The one-week internship ended with a full-time job offer.

After four years at Per Se, Cash realized that he could either “stick around and gun for management,” or he could continue to expand and grow. When he gracefully but firmly put in his notice to do the latter, he was told (by the kind of boss we should all aspire to be), “we’ve put too much work into you for you to work for another ‘whatever’ restaurant. Make a list of where you want to work and show us.” Cash wrote down two places, one of which was Michelin starred noma in Copenhagen, Denmark, which held the position of number one restaurant in the world.

Turns out, the Per Se folks had a connection, and off to Denmark he went.

After about a year at noma, Cash returned to New York for an opportunity as Executive Chef with Terisi, Major Food Groups’ first restaurant. Here he helped develop The Pool, in the iconic former Four Seasons space. Not only did he run the menu, but he also learned alongside the developers as the new concept came to life. Skills that would come into play down the road, as we all now know.

Cash met, fell in love, and married his now wife, Jocelyn. They expanded their family to include Mr. Bingley, the Instagram-famous English bulldog (@bingleycash), and then had their son, Thor. After returning for a visit and attending Greenville’s euphoria, they let family know: they were returning to Cash’s hometown of Greenville to open his own restaurant.

The concept of Scoundrel developed.

Describing it as “a bistro feeling that also feels luxurious”, Cash will open the doors to Scoundrel on October 21st at 18 N. Main St. It’s promised to be different than anything Greenville has seen before – rooted in French bistro classics, with a fun modern spin, and instantaneous energy when you enter, from the way you are greeted to the playlist and everything in between.

In closing, Cash taught me a very important lesson. Do not, under any circumstances, attend a presentation by a world class chef on an empty stomach. You will leave craving lobster Floridian, and you will be very upset with the microwave dinner you went home to.

And about those opportunities: know what you want, know what you’re good at, and when the right thing comes along, say yes.

Coworking, Offices and Meetings in the Heart of Downtown.